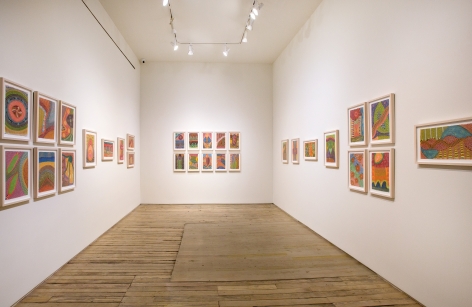 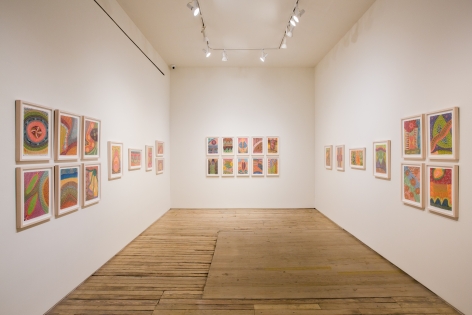 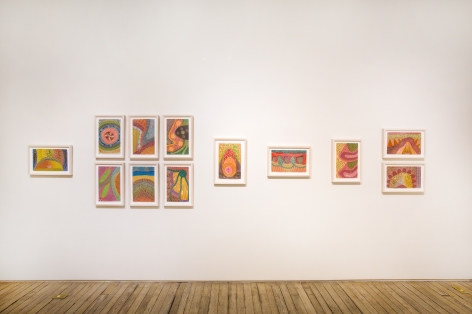 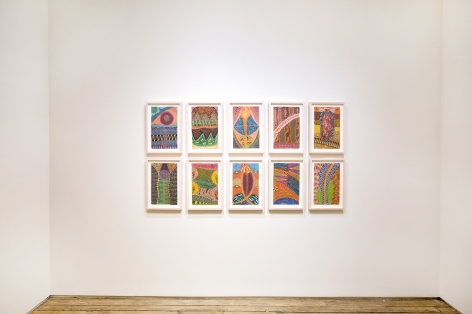 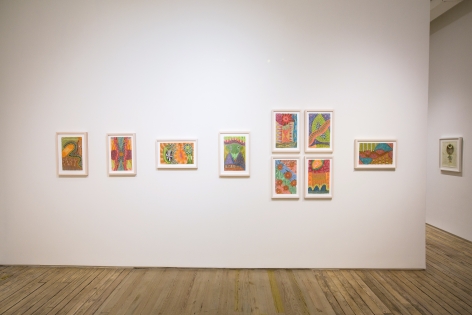 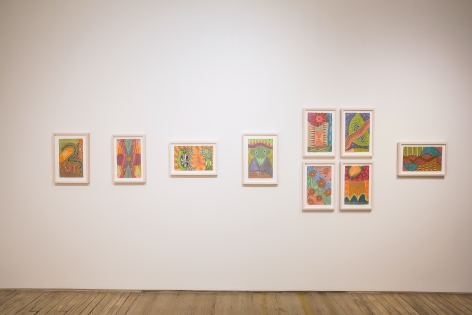 In 2014, Domenico Zindato came across a drawing album in a small shop in Mexico City. Attracted to the album’s cover art, a motif featuring two elegantly drawn herons, he opened the album to find thirty-one sheets of handcrafted paper from the Southern region of Oaxaca, all made with regional plants. After purchasing the album, he proceeded to cut the sheets out individually, painting them one by one. Having completed the first eight sheets, he laid the works side by side and noticed a feeling of strong continuity. While he acknowledges each drawing as a single work, he also realized that a narrative was developing organically, or in his words, “a visual poem.”

31 presents Zindato’s series in its entirety, a sequence of intricate and vibrant works on paper that speak to humanity, mythology, and transcendence. Abstraction and figuration coalesce through elaborate patterns, culminating as his own mythic visual language. Zindato has developed a labor-intensive, meticulously detailed drawing technique, using nib pens and fine-haired brushes on paper. Meditative in spirit, this work suggests affinities with pre-historic cave paintings, aboriginal art, Buddhist mandalas and Native-American decorative patterns. Zindato’s palette has absorbed the colors of his travels in India and Mexico, comprising vivid ochres, blues, greens and pinks. In a recent interview, Zindato explains his organic process for this body of work: “My compositions are never planned; they just grow and grow... Eventually I had thirty-one drawings, and they naturally fit together, creating a new energy together, as a whole.” 31 was exhibited at Nixon, the contemporary art center in Mexico City, during the summer of 2016.

A native of southern Italy’s Reggio Calabria province, Domenico Zindato (b. 1966) studied theater design in Rome, before withdrawing from school to devote his time to art. In the 1980s, he lived and worked in Berlin, where his interests in photography, theater, music, performance, and image-making came together in multi-media events he organized for the emblematic venues of Berlin’s post-punk nightlife. After leaving Europe, he traveled throughout India and Mexico, finally settling in Mexico City. After a decade in the Mexican capital, Zindato moved to his current residence in Cuernavaca.

Domenico Zindato’s work was included in the recent exhibition “As Essential as Dreams: Self-Taught Art from the Collection of Stephanie and John Smither,” at the Menil Collection, and is also featured in the new publication “The Hidden Art: Twentieth and Twenty-first Century Self-Taught Artists from the Audrey B. Heckler Collection,” co-published by Rizzoli and the American Folk Art Museum.

Zindato's art is in the permanent collections of the American Folk Art Museum, New York, Collection de l'Art Brut, Lausanne, Switzerland, The Menil Collection, Houston, the Philadelphia Museum of Art, The Milwaukee Art Museum and the Whitworth Art Gallery, Manchester, UK. Zindato was first represented by Phyllis Kind Gallery who showed his work until she closed in 2009. Andrew Edlin Gallery has represented the artist since then.