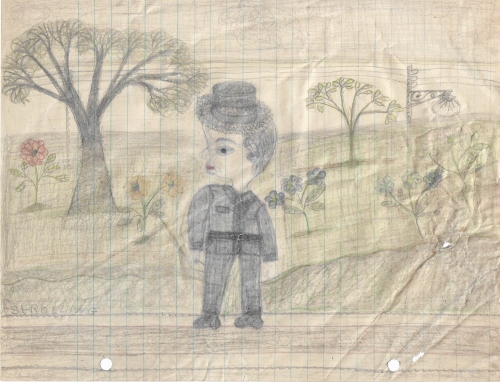 Andrew Edlin Gallery is excited to announce that it has become the exclusive representative of the estate of Pearl Blauvelt (1893-1987), a self-taught American artist of Dutch ancestry whose entire body of work — a remarkable cache of drawings in graphite and colored pencil on ruled notebook paper — was discovered years after her death in a wooden box in her abandoned former home in northeastern Pennsylvania.

Now regarded as an emblematic outsider artist, Blauvelt’s images of people strolling along country lanes, horse-drawn carriages, railways tracks, banknotes, houses, furniture, and women’s undergarments, which she often labeled with precision and care, serve as the imaginative recollections of a woman who lived a humble life on the margins of mainstream society.

The gallery will showcase Blauvelt’s distinctive works, with their multiple perspectives, rich detail, and peculiar, X-ray-like, see-through views into the interiors of buildings, at the Outsider Art Fair Paris (October 17-20, 2019) and at next year’s Outsider Art Fair New York (January 16-19, 2020), as well as a forthcoming solo exhibition slated to open in December 2019. Blauvelt’s works have not been seen at the Outsider Art Fair in about a decade, although they were featured in several solo and group presentations at Kerry Schuss (most recently in 2018) and in Glossolalia: Languages of Drawing (2008), an exhibition at the Museum of Modern Art that brought together innovative forms of draftsmanship by both trained modern artists and their self-taught peers.

Blauvelt’s drawings were recently featured in Flying High: Women Artists of Art Brut, an exhibition presented earlier this year at the Bank Austria Kunstforum Wien in Vienna, and You Can’t Win: Jack Black’s America, a group exhibition this summer at Fortnight Institute in New York. Her work will also be included in Memory Palaces: Inside the Collection of Audrey B. Heckler, which opens at the American Folk Art Museum in New York on September 17, 2019.

The gallery’s involvement with the artist’s work comes at a time when keen interest in the contributions of a wide range of female artists and thinkers in the related art brut and outsider art fields has seized the imagination of collectors, critics, curators and artists around the world. Blauvelt’s works may be found in the collections of the Museum of Modern Art (New York), the Pennsylvania Academy of Fine Arts (Philadelphia), as well as in prominent private collections of art brut and outsider art in Europe and the United States).

PDF
View More
Back To Top