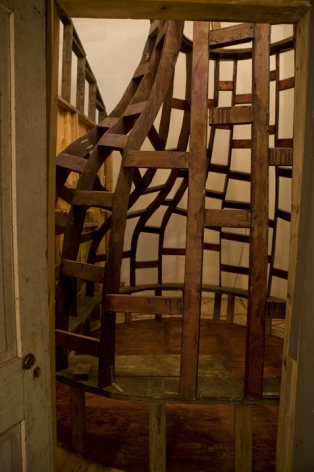 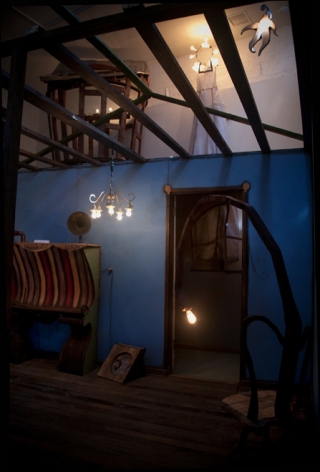 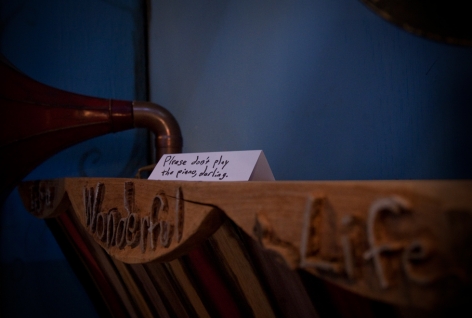 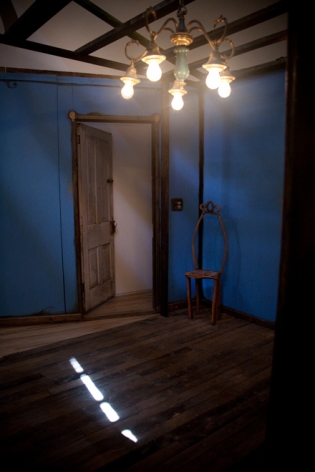 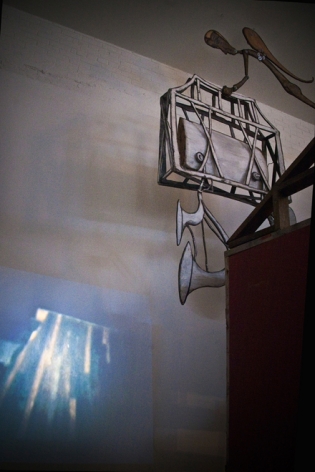 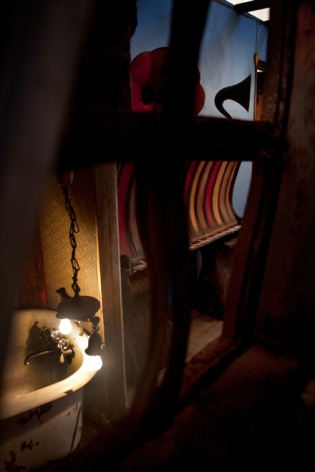 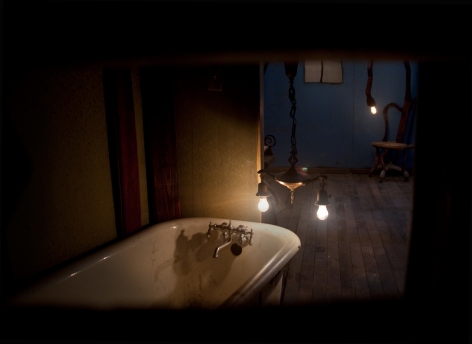 Andrew Edlin Gallery is pleased to present Brent Green's Gravity Was Everywhere Back Then, from April 17 through June 5, 2010. The show, his second solo exhibition in New York, coincides with the debut of his first feature-length film, of the same title, at IFC Center on May 7.

The exhibition and film both center around the true story of Leonard Wood, an unknown hardware-store clerk from Louisville, Kentucky, who worked tirelessly throughout the 1970s to create an original, bizarre (and since destroyed) residence. Wood hoped that his unimaginably tiered floors, vaulted ceilings, and twisted, heaving walls might somehow save his wife, Mary, from her terminal cancer. Following her death, Wood tuned his healing machine for another twenty years, before toppling from its roof, leaving him broke and incapacitated.

For Gravity, Green rebuilt Wood's home—along with four other houses, a handmade piano, a sixteen-foot glowing moon, and a giant, wooden God—on his rural Pennsylvania farm, following the crudely rendered plans Wood had scrawled on a piece of cardboard. For the exhibition, Green will install the full-scale house and its contents in the main gallery space, alongside a series of video projections and sculptures. Green describes his own journey creating Gravity Was Everywhere Back Then as, "an effort to leave something wonderful behind, which is exactly what Leonard did."

Green's work brings to mind the oeuvre of American artist/filmmaker Joseph Cornell (1903-1972), for its lack of guile and cobbled feel, while sharing an aesthetic affinity with Czech surrealist filmmaker Jan Svankmajer (b. 1934) and Swedish video artist Nathalie Djurberg (b.1978). However, his lyrical narration, along with the cadence and twang of his voice—which tremors through his films—more closely recalls Bob Dylan. A passed-down Appalachian wisdom permeates Green's hardscrabble fables yet, where Dylan is authoritative and concealed as a storyteller, Green is commanding but exposed, sharing a deep connection with his characters. He wrings hope from the discarded and disheveled to patch together a unique and personal Americana. His stop-motion animations, sculptures, and drawings hinge shakily around the paradox of life and death. Green's heroes are crooked, carved figures bathed in warm, flickering light. They speak and sing—from intone to exaltation—of American folklore, the final days of Beethoven and Thomas Edison, of deviant children trapped in Hell.